Most of our posts here really focus on Colten’s adventures, not our own random thoughts and processing. Although these posts do help us (or at least me – Colten’s Momma) process a lot of information. But today I’m straying a little from the usual type of post providing information about Colten, a therapy, or a diagnosis, to give you some insight into my own psyche. You’ve been warned. Read on with caution.

I was messaging with another mom today, a mom of a child with SB, and I said that if Colten’s bronchitis is our biggest issue right now, we must be doing ok! Then I remarked how Spina Bifida makes me see those other “normal” childhood illnesses in a whole new light. What’s a little bronchitis? No big deal! Right?!

We’ve never been a super-medical family. We do all that weird natural stuff that makes people raise eyebrows and probably talk about us when we’re not around. Our first two sons were born at a birth center with the help of midwives. We don’t usually give medication for ear infections. We amp up on certain homeopathic things when getting colds. We believe naturally immunity is good for the body. So to have even taken the boys to the ER the other night, or even to take Colten in for a cold, is way outside of our (prior version of) normal.

However, I have been a bit more neurotic about Colten – afraid that anything (spitting up too much, sleeping too much, not having “wet enough” diapers) could be a sign of something more – a shunt issue, a UTI, or some other issue I don’t know about yet. So I’ve been more neurotic, although not necessarily any more sympathetic. And even LESS sympathetic with the other males in the family (I say males, not boys, because Richard is included!).

The other day, Parker scraped his toe on something in the basement and according to Richard was absolutely fine after it happened. Until he sat down and saw one teeny-tiny drop of blood. Then the screaming and crying came flooding out! A bandaid was of urgent necessity and tears were flowing. Typically when my children get injured, I am quick to help calm them yet try not to baby them through it. Those that know me know I’m not uber-sympathetic. And it was worse before kids. Suck it up. Move on. When Richard complains about something my response is often, “Well, what are you going to do about it?” When the kids need a bandaid removed, I rip them off quickly, I don’t gently tear back (although I did make my Aunt-in-Law remove Colten’s head bandage when he had his shunt placed the first time). So sympathy just isn’t one of my strengths. Mean Momma.

Now, these little bumps and bruises the kids get have me being less sympathetic. And honestly, slightly annoyed at the dramatics. And doing a lot of wondering. I get that Parker, at almost four, is more aware of his body, gets what blood is, and it scares the crud out of him. And, again, he’s barely 4. I really need to remember that point. But I see him breakdown and (horrible mom admission coming…) think, “This is NOTHING compared to what Colten has gone through – and will go through. Suck it up!” Don’t worry – I do not say that out loud! And I feel guilty afterwards for even thinking it. Then I start to wonder – every single time, what Colten will be like when he’s 3 and gets injured. Or when he’s 2 and has to deal with another hospital stay. Or has to be catheterized. Will he be so used to medical stuff that he will take it in stride? Or will he scream and fight and resist anything being done to him (much like our last urology appointment)?

One thing I do realize during this all is that right now we actually have it really good compared to many families out there managing cognitive issues, life threatening diseases, other severe birth defects, and more. We are fortunate that the extent of Colten’s medical adventures are mostly physical in nature. And you know, four month olds don’t really do a whole lot physically anyhow! On that note, watch for an update on Colten’s physical therapy in the next day or two…

And for the picture fans out there, here is one of the boys from today at our favorite coffee place, Biggby! They enjoyed a special treat of hot chocolate and donuts. Not at all healthy or natural 😉 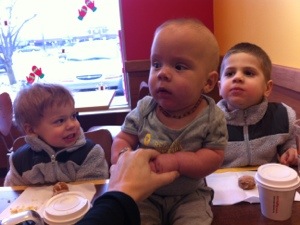 3 thoughts on “Sympathy is Not a Strength Here”