It’s actually been kind of boring the past couple days. In a NICU-boring sense. We are just in repair and maintain mode here – making sure Colten’s wound is healing from surgery and that he’s progressing in other areas like weight gain. Colten should get his stitches and drain port removed today by plastic surgery. I’m excited and nervous about that – glad the stitches will be out but just nervous about the wound area healing properly of course. Because the seam goes so far down into his buttocks, we have to be incredibly careful about fecal matter getting into the area. And I have never seen poop like this before! And for those of you that know my other boys, you know that they are high-quality poop explosion-ists. Colten has them beat. Due to the amoxicillin, his poop is even runnier than a normal newborn’s. And, where most babies’ bodies store up a bit of urine or poop in the proper channels until more comes along and pushes it out, myelo kids (as our PT calls them – kids with myelomeningocele) don’t – everything just goes out as soon as it hits the end of the road. With training this can be controlled but during infancy, it’s a royal mess. And the constant running of bodily fluids out his back end has caused his butt to look like the Japanese flag. The nursing staff worked with a wound care specialist to come up with a regime to help him a bit – so we have a mixture of iLex (yes, the i is really lower case! How fitting for a family of iAddicts) plus vaseline that goes on. This creates almost a permanent barrier on his bottom that we don’t even clean off – we just keep adding to it. Then after spreading that around, we squirt on Stomahesive – a powder that keeps the paste from sticking to the diaper. I am thinking our new normal now means no cloth diapers for this kiddo. Joy. On a good note, because he doesn’t have any active sensory nerves around his butt, he can’t feel the pain from the rawness. But of course, it still has to be carefully treated. As Colten gets older he will work with an occupational therapist to learn how to manage his toilet needs based on timing.

Yesterday Colten had his second PT appointment. We worked on stretching out his hip flexors so he can get his legs straight instead of always being pulled up; he did NOT like this one bit. We also worked on stretching out his ankle to point more downward instead of being pulled up by the calf. He didn’t mind this so much. But then again, he doesn’t have much feeling there so that’s why he didn’t mind! These are stretches/exercises we’ll need to do on Colten and he’ll need to do to himself eventually, for the rest of his life. Dan did more stretching today as well as dermatome testing – pinching areas of his legs and feet and butt to see where a response would come. Colten’s sensory reception was a bit higher today – he responded to feeling pinches in the first two toes of his left foot and half of the top of his left foot, then on the inside and outside of his left calf. His right foot was still non-responsive to touch but he showed some response on a couple areas of his right calf. Nothing on his buttocks. Still no actual movement in the calf or feet or toes – and Dan isn’t expecting that to change. We know he feels the pinches because he’s using his hip flexors and knee extensors to pull his leg up and away from the pain. 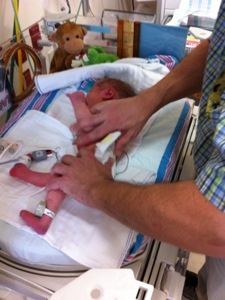 Dan explained that a child’s myelomeningocele level isn’t necessarily a black and white diagnosis. While Colten is classified currently as L3 (lumbar 3), it doesn’t mean that everything L3 and below won’t work – myelomeningocele often has more of a spattering effect. So even though he doesn’t have motor nerves in the lower part of his legs, he does have some sensory nerves. This translates to the reality that while he won’t have use of his feet and calves, he may have some feeling which is great. Not being able to fully feel, we will have to be careful to watch for things like cuts or bruising, and temperature and environmental dangers. Dan gave the example that when playing outside, Colten could easily be sitting on a rock and never feel it. We will need to be his eyes for him in the beginning until he learns that he shouldn’t sit on rocks. He won’t be able to use his feet to test bath water – he will need to learn to use his hands first. And so on.

Today Dan removed the tape-splint he put on Colten yesterday and was very happy with the alignment of his ankle bone to his calf. He will come back later today to re-check him and determine if he needs another 24 hours of splinting. This is to correct the “up and out” formation of his feet. 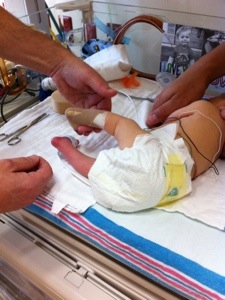 Besides PT, we get visited everyday by the following departments: plastic surgery, urology, neurosurgery, and neonatology. Plastic surgery (“plastics”) is responsible for checking the healing of his surgical seam and will be the ones to remove the sutures and drain today. Urology is monitoring renal (kidney) function and bladder emptying via ultrasounds. Neurosurgery is monitoring for hydrocephalus. Today they found his head circumference was stable from yesterday, but is displaying a lot of “sunset eyes” which is typical in children with hydrocephalus – they drop their eyes down far in the sockets and you see a creepy amount of the whites of the eyes. It looks very weird with Colten does this. The big determining factor for whether they’ll place a shunt will be the ultrasound tomorrow, coupled with what they’ve observed in him the past few days. Not sure what time that ultrasound will be done or read by Neuro, but we are anxious to see what the decision is.

In general, Colten is doing great otherwise. They’re watching a few things like bilirubin and sodium levels as well as overall weight gain, but he’s “just a myelo kid recovering from surgery” as the PT puts it. I know I talk about him a lot but I swear he’s a baby whisperer. Colten just settles in and stares at him so peacefully… And he’s been able to provide Richard and I with great insight on how to move forward from here and bring Colten home just like any other child. It’s hard to grasp some of the realizations of the whole thing – that he’ll never jump or run and that he most likely will wind up in a wheelchair for life. It’s not as if we think less of someone that cannot run, jump, or is in a wheelchair. It’s just that every parent has a picture of what their child will do in life and most parents don’t picture braces, mobility devices, catheters, and wheelchairs. We just have to work through the process of changing our picture, of changing our normal.

7 thoughts on “Maintaining the Status Quo”