A week or so ago, I was lamenting to Richard about our luck, or lack-thereof, over the past couple of years. There were also some things that at the time seemed “bad” but ended up leading us to a better place. In the moment though, it was so hard to see the silver lining or believe that it would just all work out. It got to the point where something bad or even slightly off would happen to us and I would just say, “Of course. Why would this NOT happen?”

Take for instance, our attempted move a month ago yesterday. We tried moving in only to find an infestation of fleas, among other issues. We are STILL at my parents (thank you Mom & Dad!). Thankfully, we have another home we’re moving into it’s just not ready yet. And while we are happy about so many things with the new house (recently updated, nicer neighborhood, lower taxes, closer to preschool, single story, beautiful backyard), we are getting anxious to get into it and every day we are not in there is a reminder that yet again, “of course this would happen”.

I’m not usually a Debbie Downer kind of person in my opinion, but the past few years have really knocked the wind out of my sails and this past year alone has been the toughest on us, yet we have benefitted from such incredible support from family and friends – and strangers. It’s kind of funny (to me, but probably not to my parents), that we kind of bookended Oct 2012 and October 2013 living with them. When Colten was born and we moved him to U of M Mott Children’s Hospital, our other two boys went to my parents for those two weeks. One year later, not only are those two here, we are ALL here. It’s possible when we leave they may change the locks, or move!

So where did all our luck go? Colten. Funny, right? You would think that after having a child born with the most permanently disabling birth defect (spina bifida), after having him shunted for hydrocephalus, then having a shunt revision two weeks later (so that’s major spinal surgery and two brain surgeries in his first 1.5 months of life), after having to put him on daily medication for kidney reflux to avoid infections, after finding out about some other nether region issues, after finding that his lesion might be low (a good thing) but his function is higher up (a bad thing), after monitoring food intake and um, output, on a daily basis to make sure it’s coming out, after fighting with the cranial department to get him seen for a helmet only to discover he certainly should have been sent for one – months earlier and now wears one 23 hours a day for who the hell knows how much longer, after getting him his first set of leg braces, after going to 2-3 appointments per week for therapies, tests, studies, checkups, checkins, after all the paperwork, insurance, and finances, and add in all the normal first-year baby stuff… after ALL that, yes, I believe all our luck went to Colten. 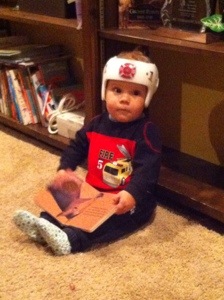 Colten was born with Spina Bifida Myelomeningocele and Hydrocephalus. Along with the myelomeningocele comes Arnold Chiari II Malformation (his is mild so far) so he has that diagnosis too. And because bladder/bowel issues go right along with spina bifida, he has kidney reflux. Besides that, he’s GREAT. He’s healthy, happy and moving right along – figuratively and literally. I am very thankful to have met countless other families on this Spina Bifida journey and they amaze me. And they terrify me. I feel like many of the families have extra challenges in their days with their child – additional things that have creeped up or were there since birth. Or their child’s lesion is higher up. Yes, I have also met families that I felt were luckier than us, but today I’m focusing on our good luck! Spina Bifida being a neural tube defect, it means the spinal cord is involved. And frankly if you ask me, once you mess with that, there’s really no telling where the problems will arise. So I think we got incredibly lucky. Maybe one day the other shoe will fall, but right now we have a one year old little boy with a laugh that sends a smile down to your toes. We have a one year old little boy who crawls all over the house and gets into trouble (take that, doctor that said “he can’t move his legs at all”). We have a one year old little boy with arms so strong he thinks he can beat his older brothers in wrestling (one day, Colten, I am sure you will). We have a one year old little boy with no other major medical problems. I consider him to be the benefactor of all of our lost good luck!

4 thoughts on “So That’s Where All Our Luck Went!”