At the end of January, Colten got new AFOs along with torsion, or twister cables, attached to AFO shoes. This has been a whole new production for us, just as his KAFOs were an adjustment as well. Over the past number of months, we’ve been using with great success the rotation straps from our local school district. The nice thing is that those also connected to one pair of shoes and had a belt system, so we were getting prepared for the torsion cables, but it’s still a bit more intimidating for Colten. The belt is very stiff compared to the strap system – it’s made of what I think is a metal band that goes about halfway around him, covered by leather and padded with wool inside. He’s not uncomfortable in it that we can tell, it’s just different and an adjustment. He fusses every time we get him into it. He wears his AFOs, plus this belt/shoe/cable system.

Below you can see the hip joint and where it attaches to the belt. There is a moveable joint at the hip and the ankle, although his AFOs do not hinge at the ankle, so I’m not sure that joint gets used much! 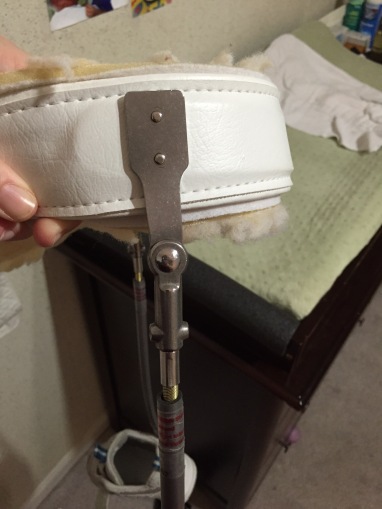 I am fascinated by these cables. When I have previously seen other kids with Spina Bifida using “twister cables” or other rotation devices that include a hip-to-foot bar and belt system, I have only seen cloth ones like he borrowed, or solid metal bars, similar to what was running alongside his KAFOs. The metal bars absolutely keep the leg in stiff alignment. So when I first saw the orthotist carry these cables in, and I saw how bendable the cable portion was, I got nervous! But, as I said, this setup is amazing. You can see the very thin, twisted metal cable inside the rubber sheathing here. When the distance between the hip and foot is decreased, such as in a squat position, the cables will still encourage the desired alignment, but give more flexibility. It’s easier for Colten to crawl and turn and twist in these than it was in his very rigid KAFOs. But when he is fully extended in a standing position or stepping, the cables are so taut that even if I try to turn his foot inward, I cannot!

More awesome-ness about these… You can see the red markings on the bottom connection point in the image below. This is his current rotation setting and height setting. These will allow for some height growth, as well as rotation adjustments. When Colten does NOT have his cable system on, his feet turn inward – even backwards at times. This causes stress on the knee and hip, as well as causes him to stumble over his feet when using his walker. The cable system, however, allows us to change the degree of rotation we want his foot at. So if his right foot turns in more, we can counter-adjust it so it rotates out. Let’s say he has a little bit of strength in his left for externally rotating his own leg – we could opt to decrease the rotation in that so that it might turn in slightly, but he could work at turning it out. Or, we could over-rotate both to turn slightly outward in the hopes that a new position of his legs would encourage different muscles to work. In time, could these muscles develop, strengthen, even work on their own to rotate his legs and feet? We don’t know, but the idea of muscle memory is a good thing. You can also see in this picture how the cable system is embedded right into the sole of the shoe. We chose to have the cable attached to the shoe instead of the brace so that in case the cable broke (which we’ve seen with other kids with SB, with different cable designs), he could still use his AFOs.

I love taking these progression photos! He’s grown so much since the first pair of AFOs at one year old. We’ve tried a few different things over the past year and a half, and are very happy with the new cable system. The AFOs are certainly something we don’t expect to change much over the years, but the KAFOs were not a positive experience for us in multiple ways. We are glad we have a break from those, for now at least. Colten picked out a tool design for this recent pair of AFOs, so if you see him, you can ask him to show you his “tools” and he will! Since yellow has been a favorite color of his now for a while (he loves his yellow wheels – his walker!), we made sure to include that in this recent pair as well.

Now if only I could have them make an Elmo pair of AFOs, then we would be all set!

One of the things we’ve been trying to work with Colten on is independence-style skills. When we were in the NICU with him, his physical therapist reminded us that it would be important to treat him just like our other kids… when we called them for dinner, he should get himself to the table just like his brothers. Whether he chose to crawl, walk, scoot or slide on his butt, we should push him to do things himself. I was reminded of this the other day when I had the boys’ breakfast plates on the counter. I left the kitchen only to come back and find that Colten had pulled his plate off the counter, lowered it carefully to the floor, and was pushing it across the floor to the dining table! So the next day I prompted him to take his plate to the table again so I could see how he did it. Here he is in motion, followed by a proud smile upon reaching his destination! 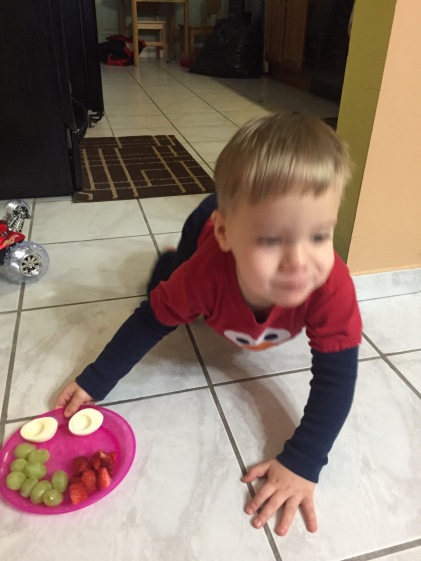 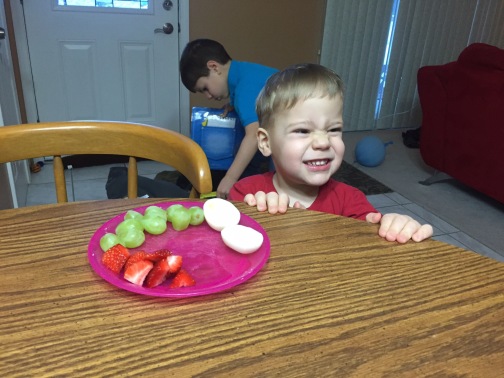 Continuing to foster this little 2-year-old’s independence, we moved him to his “big boy bed” recently as well, complete with Thomas sheets and all his nighttime buddies – Bunny Foo Foo, “Other” Bunny Foo Foo, Little Elmo and Bedtime Elmo.

Last weekend we attended the Dance Marathon at the University of Michigan. This is a year-long project for the involved students at U of M and it benefits both Beaumont Children’s Hospital and Mott Children’s Hospital – both of which we get services from! The funding – this year they raised over $460,000!!!! – goes mostly to the rehab and therapy departments, some special groups and items, etc… We had a lot of fun with our 6B family on Sunday… watching the evolving line dance, joining them for lunch, chasing dance floor lights, and meeting other families.

And more superhero cool with this amazing Spiderman hat from our friend Brynn’s aunt! We get compliments everywhere he wears this (which has been everywhere, all day, for a couple months now at least). Note the rainboots here… we were able to find a pair in our stash of boys clothes to fit over his AFOs so he could splash in puddles with his brothers last week. He managed to soak himself completely from the waist down and had tons of fun doing it!

Here is our addition to his belt to make it slightly more enticing for him (it’s not working)… a little Elmo ribbon glued around it.

And those are our updates for now! We just had his transition meeting for his special education team and we have a lot to consider in the next month or two as we decide what is best for Colten and our family in the next few years in regards to his education and therapies. Stay tuned, and enjoy the nicer weather! We sure are!!