Today started early. EARLY. Before I get into it, I’ll quickly recap yesterday.

Wednesday, June 7: Colten was taken back into the operating room and fully sedated by 8:00 AM. Surgery lasted 13.5 hours. Because surgery crossed the 12-hour mark, they decided to leave him intubated indefinitely. We went up to his PICU room and settled in for the night. Thankfully, both Richard and I stayed overnight. (Thank you Anna!)

1:40 AM – The “night” sort of ended around 1:40 AM when I heard someone come into the room. It was an ultrasound tech with a machine. I asked what she was doing and why and she responded, “All I can say is that I was called up to do an ultrasound, stat.”

AND NOW WE ARE AWAKE.

Jen, Colten’s night nurse (last night and the night before!), was right behind her and said she had noticed his one arm was slightly more swollen than the other and they wanted to check for a blood clot.

AND NOW WE ARE OUT OF BED.

The ultrasound technician completed the ultrasound and provided preliminary results to the staff outside the room. Jen returned and informed us that the test was positive and he had a blood clot going from his PICC line up to his shoulder.

While everyone in the room seemed to remain calm, my mind blew up around the idea of a blood clot and I instantly had a sinking “pit” feeling in my stomach and continued to be extremely nauseated for the next NINE hours. At that moment, they needed to remove all the lines going into the PICC line and relocate them to the IV in the other arm (which we thankfully had not removed sooner!). Normally, blood clots are treated with an anti-coagulant, but seeing as he just had major surgery, they didn’t want to thin his blood too much. Since that was all they could do for him at that time, so I proceeded to freak out for the next many hours.

Sometime shortly after that, Colten started to stir, but they weren’t ready to have him come out of sedation or get the tube removed from his throat. Since they were concerned that he would get upset about all the wires and the tube in his throat (can you blame him?!), they had to restrain his hands to the side of his bed. While this was bothersome at first for me, Colten only had a few brief episodes of being pissed and trying to get his hands, but quickly fell back asleep each time.

3:00 AM – One of the residents came in to let us know that the current treatment plan is to leave the PICC line alone as it is (not being used, but still “in”), and just monitor it. All was okay, his vitals were great and there was no reason to worry.

Sure. That helps. NO worries, just a big clot in our child’s arm!

7:00 AM – Dr. Hiller came to check-in. (He is our primary urology surgeon’s “2nd in command” and was in the surgery the entire time yesterday too.) He let us know they were getting the hematologist (blood doc) on board due to the blood clot and we would have more information later. He did some checks and flushes of the surgical sites. All good.

7:30 AM – Dr. Liss (our primary urologist) visited for a brief check-in, looking over what Dr. Hiller did, and said all looked good as well. He reiterated the next steps for the blood clot and expressed his concern about it. (Finally, someone else concerned about it! Not that no one else was, but he was the only one not completely at ease about it.)

(By the way, a LOT happens in hospitals before the sun comes up!)

10:30 AM – Our nurse, Shawn, came back in with a wonderful shot of Lovenox, kind of like Heparin, a blood thinner. The hematologist ordered a small dose of it to get started – small enough that it would not hopefully cause any issue with the surgical sites bleeding but would at least start the process for stopping the clot from growing.

11:05 AM – EXTUBATED! Colten started coming out of sedation, fighting the breathing tube and was finally able to be extubated (remove the breathing tube). When the tube came out, it was a quiet murmur of “Momma… Momma… Momma…” (heart melting). As soon as I saw him awake, my stomach returned to normal. It was all nerves. Once I got to him, his murmur changed to, “I want to go home.” I know buddy, I know. He started asking for water, and was able to take some in with just a sponge on a stick thing. Never seen that before – very cool. It limits what he gets to just drops. Since his bowels are asleep from the surgery (likely for 6-10 days), he cannot eat or drink anything until they start to wake up, and then has to carefully return to eating. The NG tube running up through his nose and into his stomach will suction out any little water that does get down there. 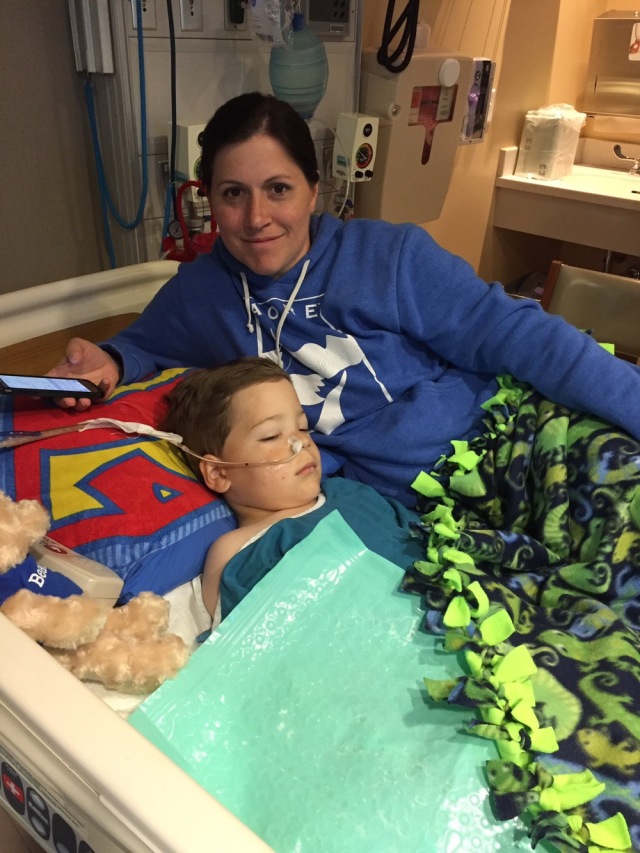 1:40 PM – Dr. Hiller returned and explained in more detail what we were doing with the Lovenox (small does now, increase about 48 hours post-op – sooner if needed due to negative changes). He also explained that our hope is to be able to leave the PICC line in because we will  likely start TPN (Total Parenteral Nutrition) in a couple days and need it for that. TPN provides more nutrients than just sodium chloride IV fluids. Colten can be okay on standard IV fluids for a few days, but will need more sustenance after that to help him heal and stay strong. However, feeding tubes aren’t allowed because we need to keep the stomach and bowels completely clear right now, so fluids directly into the blood stream are the only way to do this.

2:00 PM – Dr. Berman came to meet us. He is the Chief of Pediatrics here at Beaumont Children’s Hospital, and our hematologist. He further explained the Lovenox usage/dosing, topping it off by telling me that he would be on this for 6-8 weeks. This is given in shot format, so I assumed, and asked, “So, we take him somewhere to get this every single day for 6-8 weeks?” He laughed. Said, “no, you’ll give it to him!” Hm. Yeah. I don’t do needles! Richard had left the hospital by this time to attend Max’s Kindergarten Celebration, so when I texted him the information, I followed it with, “NOT IT!!!” I’m not sure he thought that was amusing.

6:15 PM – Dr. Liss returned for an evening check-in, flushed Colten’s tubes, applied some dressing to the surgical sites, and carefully reviewed all the work that was done and how Colten seemed to be responding. He’s extremely cautious with everything, which we are grateful for, and is leaving no stone unturned. He hopes to leave Colten in the PICU until they kick us out onto the regular peds floor. This situation gives him the most attention, care, and monitoring, so we’re all for that.

The rest of the evening was fairly quiet. Richard and I were again able to both be with him – my parents had the other children. They have been amazing every single day. My mom even came up this morning after finding out about the blood clot, and stayed through the afternoon when she turned and went to Max’s Celebration. My sister Kara came up to visit this evening which Colten loved – he was the most awake for her and was quite expressive with his eyebrows as she pulled out the various gifts she brought for him!

We definitely try to read every message and comment sent our way and appreciate all the love and support. Right now, we’re in a waiting game of getting his body to fully wake back up, have him regain strength, get some rest, and also start moving. He has a long road… Tomorrow the goal is to get him out of bed (yikes) and sitting in his wheelchair. We’ll start by just sitting on the edge of the bed!! Wish us luck 🙂