It’s been a while, but that’s a good thing! Yes, we are still here at the hospital but we make steps every day getting closer to leaving!

Here are the highlights from Day 9 through today…

DAY 9: Had some play/work time with Occupational Therapy – he had a lot of fun but is clearly still very weak and in a lot of pain. Special visits from Grammy, Auntie Kara, and Aunt KiKi. We got moved out of PICU into the general pediatric wing. We were in a semi-private room (the “Transformers room”) for this evening, night and a little of the next day… 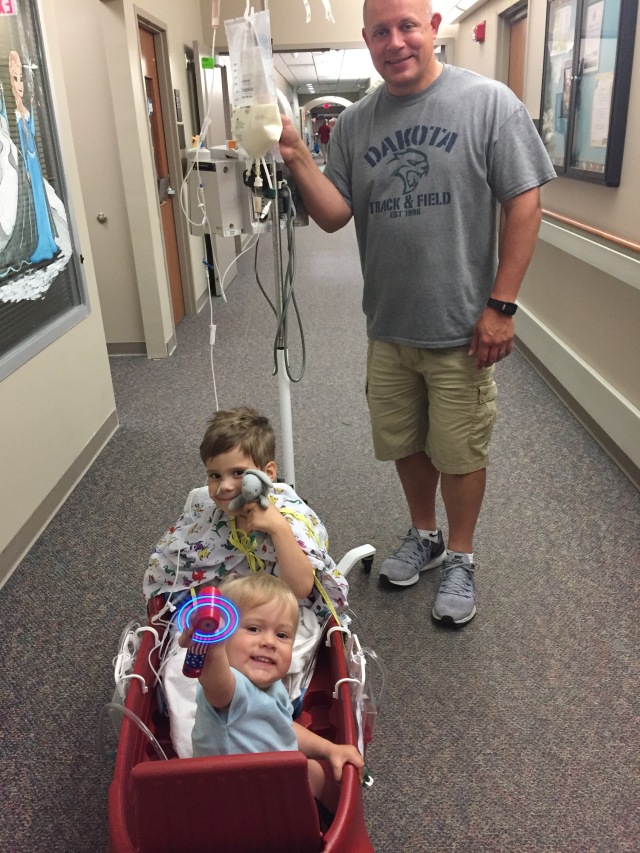 DAY 10: The NG tube came out of his nose! Woohoo! This means he can start drinking and slowly work towards eating. Enjoyed time with Sophia and in Music Therapy. Mom learned how to do some of the necessary, long term procedures that go along with this surgery. We moved into our own private room for the long haul (the “Aladdin room”) and quickly decorated the walls with all of Colten’s goodies and cards. He ate about 35 little ice chips today. Also had visits from Auntie Kara and Aunt Coury today! 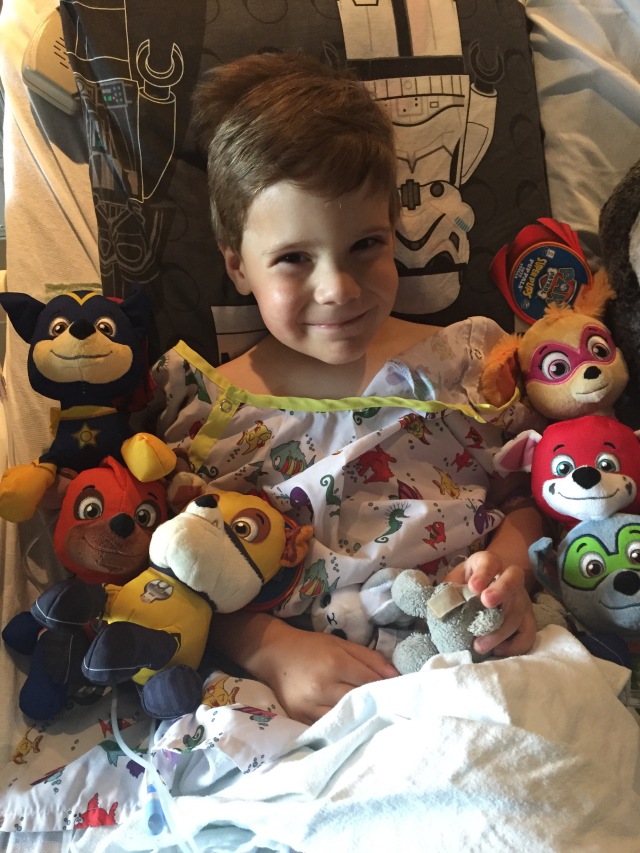 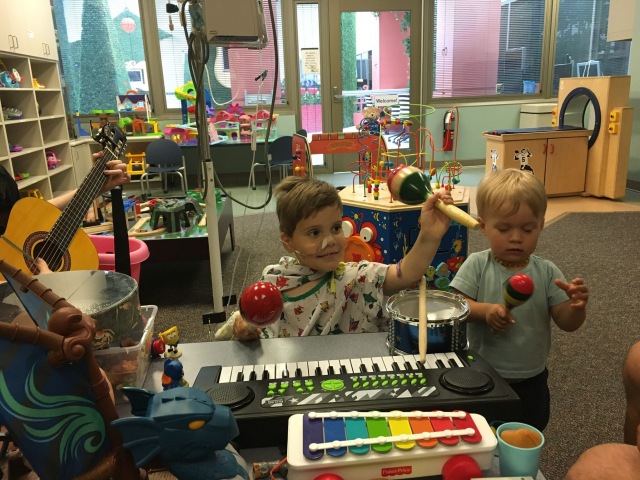 DAY 11: Random bloody nose at 1am. Thanks. Worked with Physical Therapy and Occupational Therapy today. Took about 6 very supported steps using his walker and screamed and cried the whole time. All done with that, Momma says. NO need to push it right now. Was happy as a clam once he was in his wheelchair and got to go swing in the therapy room. All smiles then! Propelling himself a little in his wheelchair now, while we pull IV behind him. Went to a summer luau party with his Grammy & Papa and REALLY wanted a cookie, which he could not have. More ice chips; said popsicle was “gross”. Little sips of water. Finally got his first visit from Max today! They enjoyed seeing each other!! Momma also got a special visitor friend – thanks Melissa! 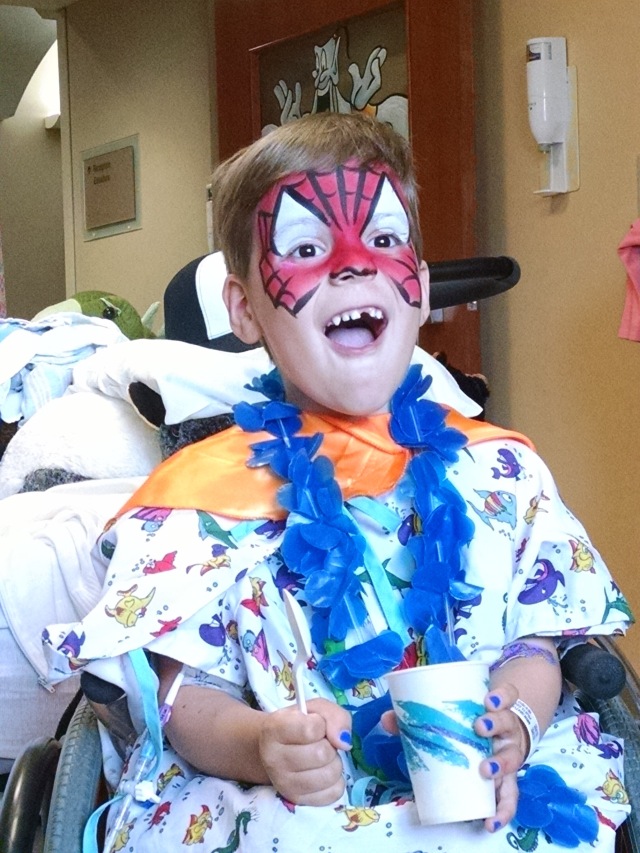 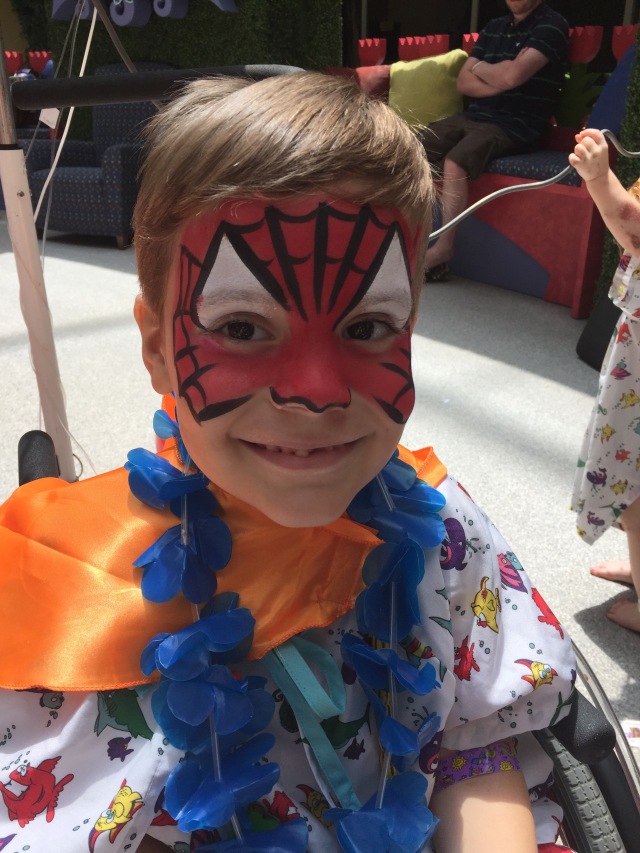 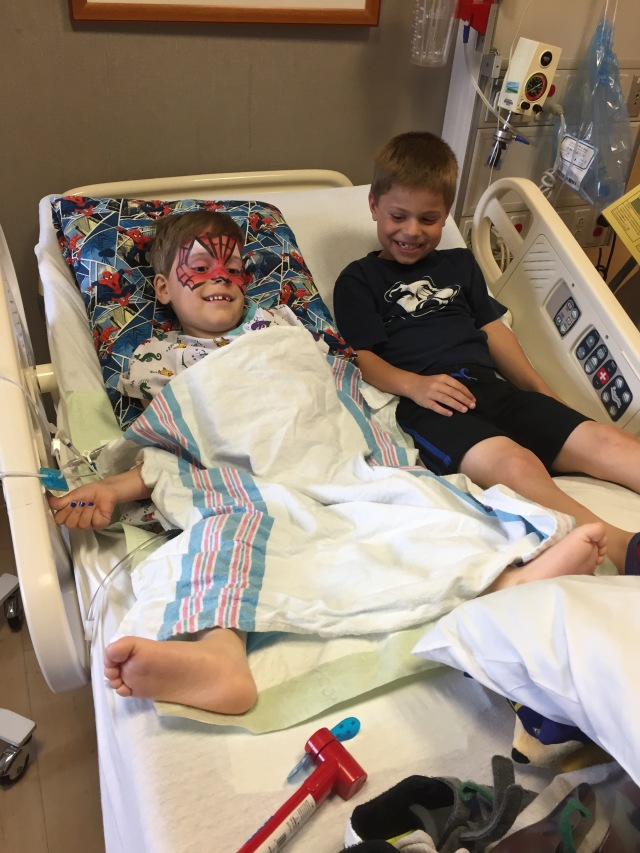 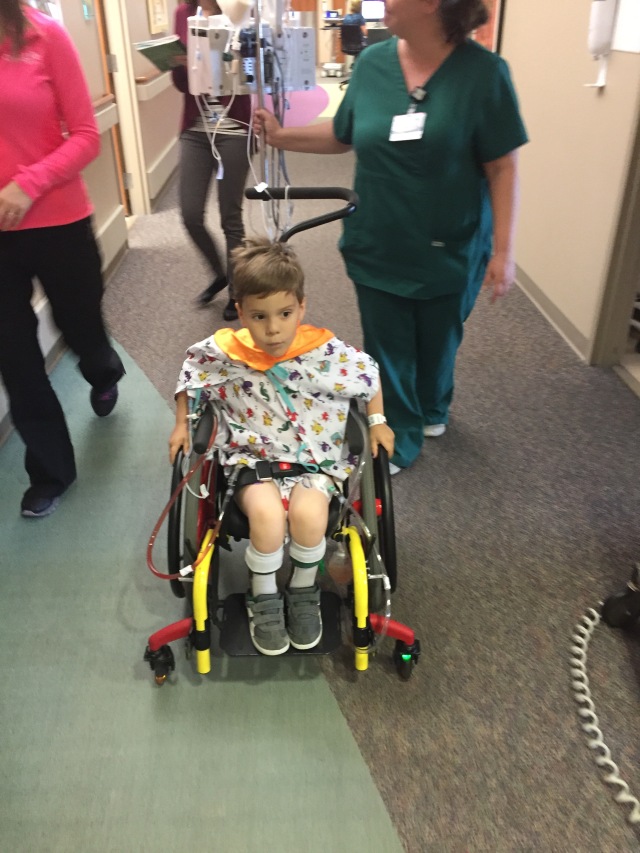 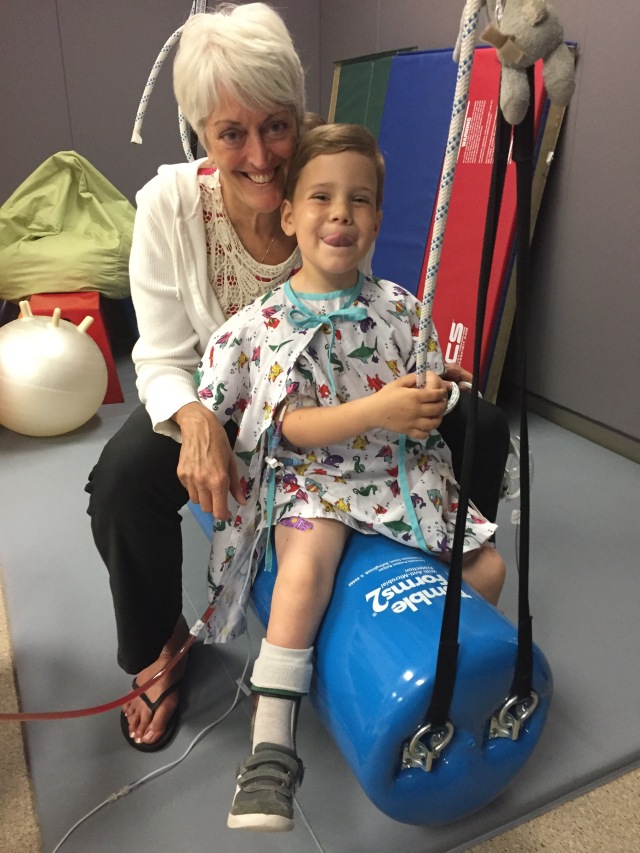 DAY 12: Lots of wheelchair time today, and did a special craft for Father’s Day with Child Life. Very nice visit from his Grandma Cathy and Great Aunt Carol all day! Consumed a little Jello and some lemonade. Had a visit from Cousin Pat, too! And the day was capped off by a visit from his Papa, who came wrapped in a box to fulfill this little boy’s wish from before surgery… 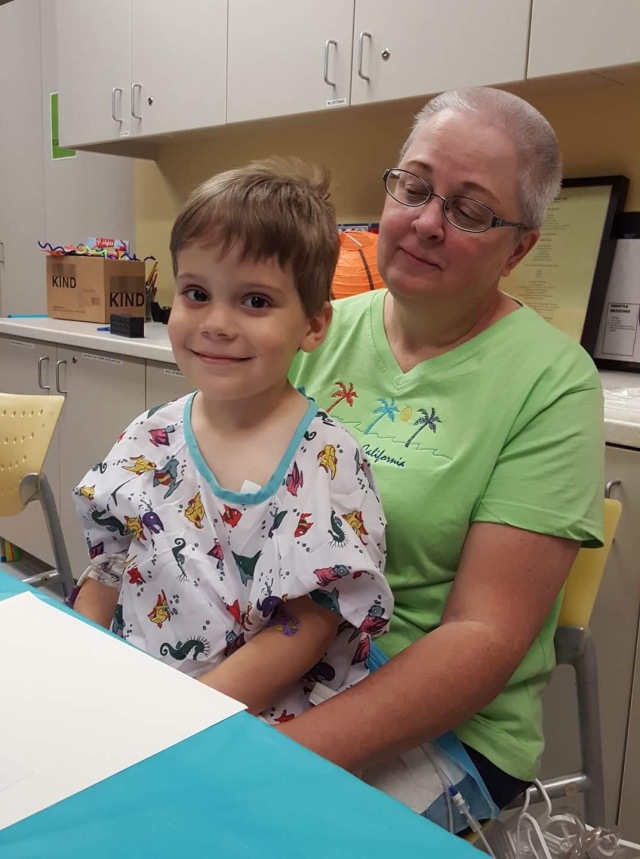 DAY 13: Finally on injections once/day (blood thinner / anti-coagulant due to the blood clot in his arm from the PICC line) – still HATES them and is actually really mean to whoever is in the room during the injections. He’ll start somewhat nice – “please stop it – stop it please”, then moves to shouting, “I hate you, get away from me, stop that, you’re crazy” – he HATES HATES HATES these injections. On this day, I gave him the first injection I’ve ever had to give anyone and I felt like I was going to throw up after it. Struggling to have to do this for 6 more weeks to the little man. He ate more this day (Sunday)… a little ice cream cup, some apple bread, and drank some lemonade. Spent quite a bit of time in his wheelchair and the whole family came up to visit for Father’s Day (and when Richard asked the next day if he should bring them all back, I quickly said “absolutely not”!!!). I took a little break to visit my dad with a couple of my kids – Richard and Parker stayed back with Colten. So now Richard also knows how to do some of the procedures we’ll continue doing at home. 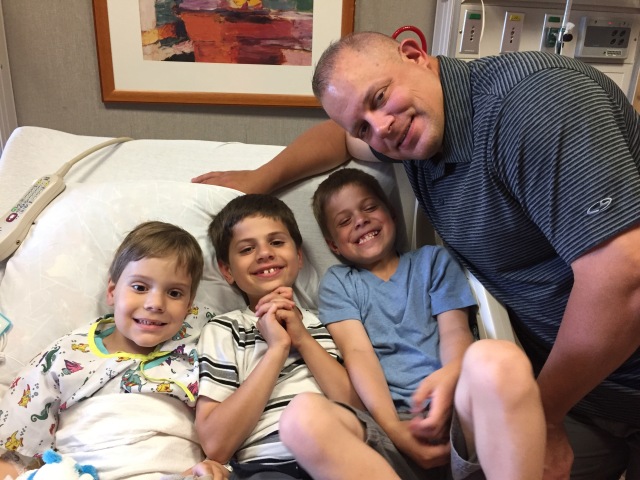 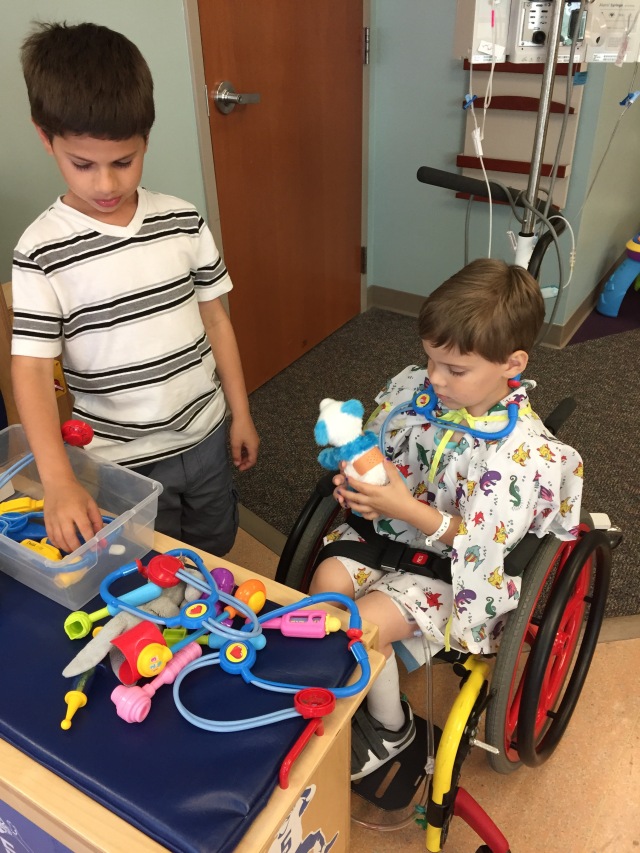 DAY 14: Today! We are two weeks in and the end is closer. We hope to head home later this week sometime but this little guy needs to EAT some more food. He’s very picky and finicky right now, and his stomach is super tiny from not having eaten in two weeks. We’re starting to ask a lot of questions about home care, since when we leave here, Colten will still have numerous tubes and bags attached to him that we will have to lug around with him and care for throughout the day. The surgery and initial recovery is just one part of this process. The next 4-6 weeks will be difficult for him still, then we return for another minor surgery to remove the tubings. I’m sure he’ll be delighted.

He ate a bit more today – some pushups, a bite of egg white, couple bites of cream of wheat, half an English muffin, a good amount of an ice cream sandwich, some bites of crackers and bread, and a Swedish Fish as a treat for some evening torture (oral medication and replacing the PICC bandage on his arm – which if you’ve never had before, apparently hurts like mad according to Colten). 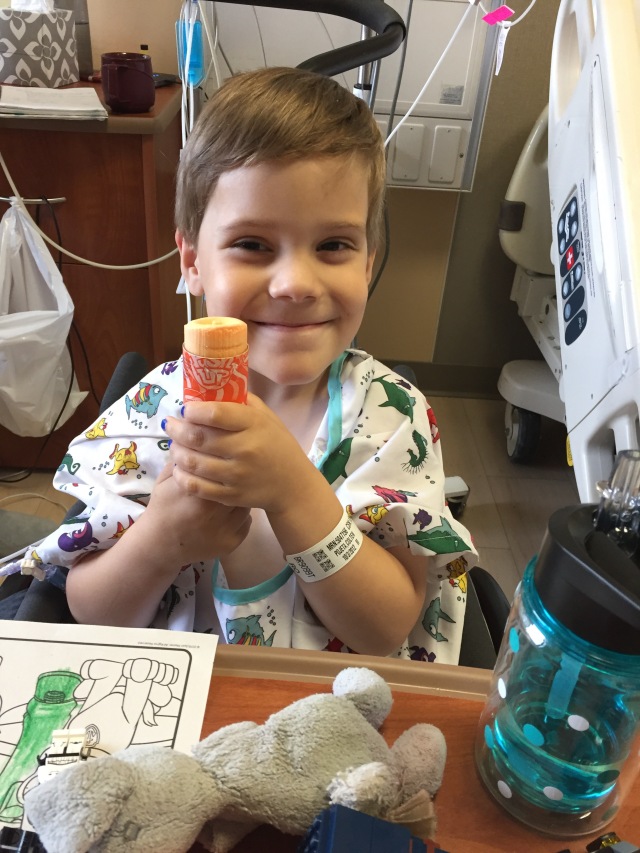 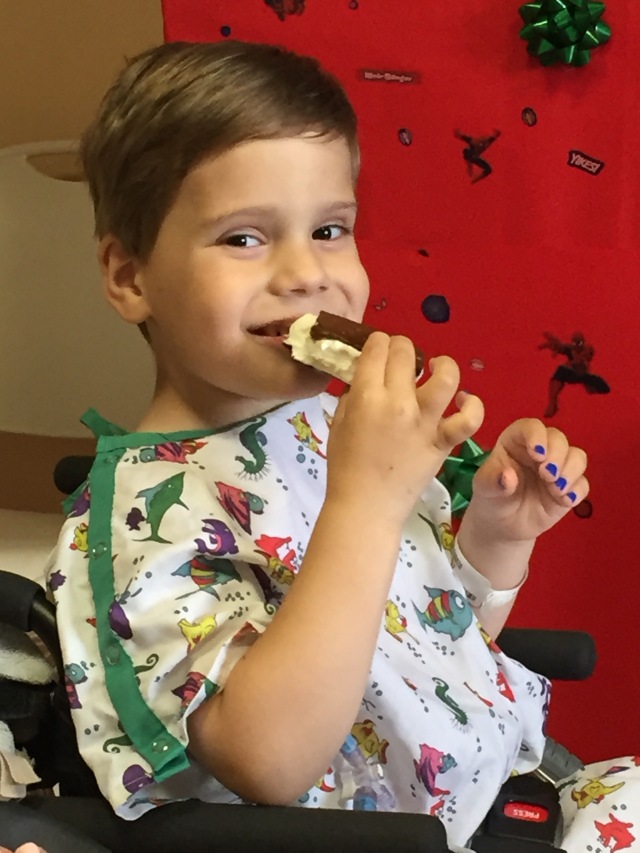 Today was pretty busy, with PT/OT working with him again, as well as Music Therapy. We also added in another procedure for the first time today, that will be something we continue long term. It was a success and again, puts us that much closer to going home. He spent so much time with his Grammy today! He also had about four hours off his IV, as they’re starting to pull back on the TPN (PICC line nutrition), and he took off raring to go in his wheelchair! It was good to see him moving around so easily. We know walking will come slowly – he is such a “trunk” walker, using his hips and abs so much, that it might take him quite a bit longer to feel comfortable walking with all that was done to him during surgery. Oh, and did I mention I made him throw up today? Yeah. Got a bit ambitious on giving him medicine – forcing it, really, that I pushed it through the syringe so fast it shot into the back of his throat and caused him to throw up both doses of medicine he had, plus some of the food he had consumed. Thankfully we had a much better second round of that medication this evening. When I bribed him with candy. 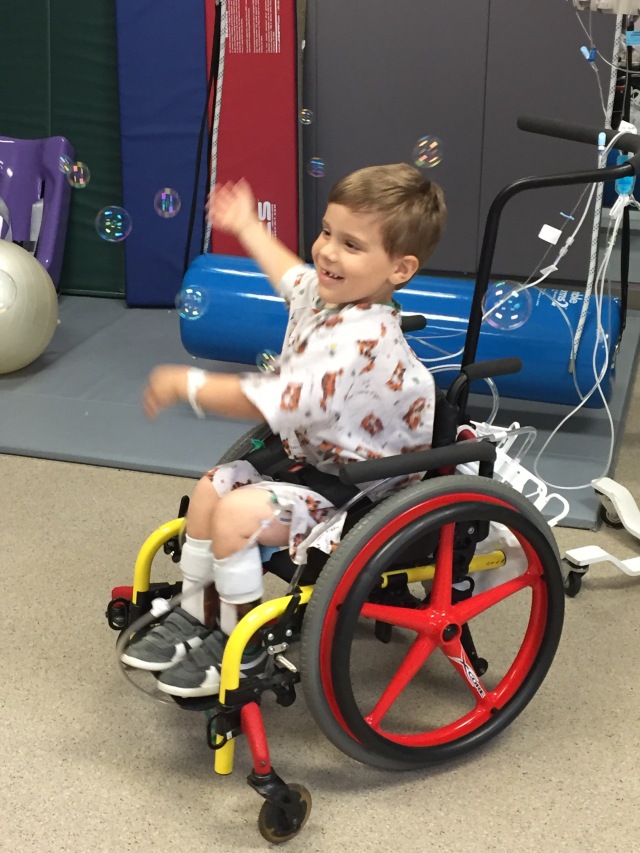 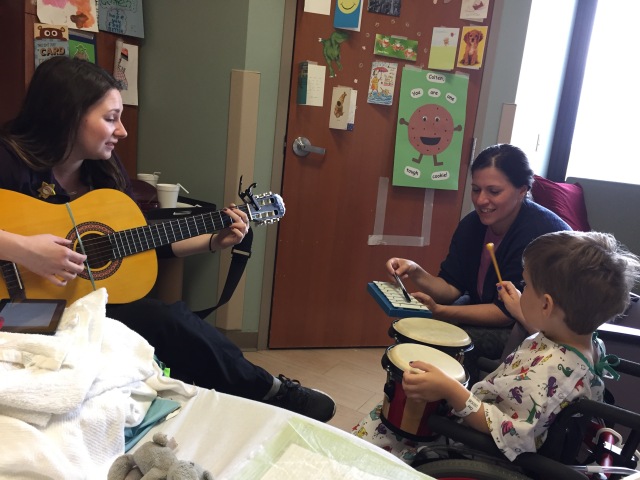 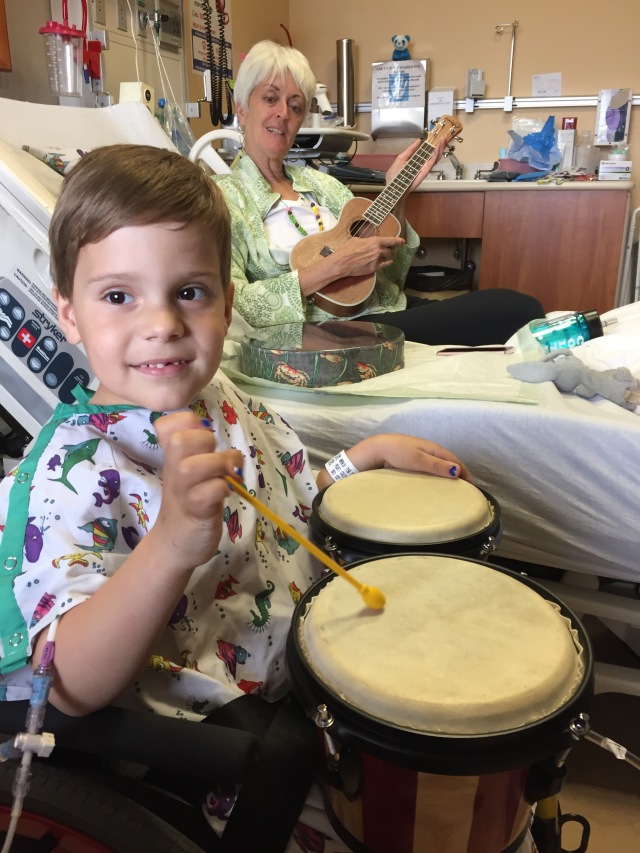 We are so ready to be home. He’s tired of everyone poking and prodding, removing bandages, checking incisions, doing injections, wiping things with alcohol (he hates the smell), moving him around too fast or too slow, taking medicine, etc…. We need more sleep, we need more “home”. We’re working on it! He’s trying to eat, I’m trying to bribe him!

Again, a huge thank you to our family and friends. I am overwhelmed and often just in shock over people’s generosity and care. Thank you for being in our village. Our amazing Elmwood family has continued to provide food for the family at home and we are so appreciative of this. Our families have come day after day to spend time with Colten. He so enjoys these visits, and it gives this mom some breaks from 24/7 care and entertaining. People have sent cards, gifts, and more. We haven’t even opened everything – we are still rationing it out because we know he’ll need some things back home when it’s not so easy to take him outside and out and about. So thank you for finding a way to make him smile and to ease the daily grind for us. Thank you so very much!

Hopefully the next time you hear from me, we’re busting out of here or already home!