I’ve mentioned before that this adventure redefines normal for us and sure enough, yesterday that concept smacked me across the face. Quite a lot happened in the past day since yesterday afternoon’s post so I’ll try to catch you all up…

Yesterday afternoon (Saturday), things were going pretty well. I had actually started to nurse Colten the night before and continued to do so Saturday. He was off all pain medications (was on scheduled doses of tylenol with one dose of morphine in there as well) in less than 24 hours post-op. This baffles me, as I am still randomly popping some ibuprofen myself from the c-section. Then a nurse reminded me that he may actually not have much sensitivity back there by his incision and that might be why he’s not in pain. Either way, he’s been off pain meds and he seems to be doing great. He was still groggy through Saturday afternoon but would have some small awake times with his eyes wide open and looking around.

Richard and I decided we really needed to see those other two boys of ours. We had not seen them since Thursday and it was Saturday. Not a huge deal as they’ve been to Grammy and Papa’s for three days before but this was just different. We were so engrossed in Colten that we felt like we had not seen them in a week. So we took care of Colten’s immediate feeding time slot, left behind some milk for the next feeding and planned to be back by the one after that. It was extremely weird leaving him by himself. I know, the nurses actually watch in on them and mostly he just slept, but STILL. Very hard to walk away from him.

We got to my parents’ house around dinner time and they took off. I’m sure it was a much needed break for them!!! I reminded them they had to come back so we could return to Mott’s! We enjoyed dinner, playtime and getting the boys to bed that night. It was refreshing to see them and talk with them, but it was insanely heart-wrenching to walk out the door again and leave them there. We are so grateful that my parents and the rest of my family are able to juggle caring for them and occupying them right now – it’s truly making our stay with Colten feasible. It’s still hard to be so removed from them. Usually when they’re with my parents I try to get updates on what they’re up to, pictures, etc… It bothers me that they are so far from my daily thoughts right now – everything here just sucks you in and removes you from the outside world. Richard and I both had a good sized breakdown after leaving them. Besides dealing with all of Colten’s needs, the hardest part of this is not having those boys with us every day. My mom said they woke up this morning in GREAT moods though, so I think the re-charge was necessary for all of us and will hopefully get us through some more days until we can see them again – and hopefully get them here to meet their little brother!

When we left my parents I called Colten’s nurse to let her know we were on our way. She informed me that Colten had lost his IV and they just were struggling to get it back in. They could continue trying or switch him to full feeds. Since getting the IV out means one more step closer to normalcy and one less tube to manage, we decided to go to full feeds. Because I had been unable to pump much out, the nurse said that formula supplementation would be required. And meltdown. I was upset by this because I felt like feeding was at least one thing I would be able to do for him post-op (and one thing I could still control), and formula wasn’t in my plan. He had spent days on sugar water already and I wanted to focus on feeding him myself after surgery. The nurse telling me I didn’t have enough and forcing the formula supplementation was just a big smack in the face reminding me that since September 18 when we found out about Colten’s Spina Bifida, we had surrendered more control than we could ever imagine. Richard did the right thing by reminding me that supplementing would not be that big of a deal – the kid already had more drugs in his system than both of his brothers combined and formula would be just fine.

So we’ve been on an interesting feeding adventure since then. Since our goal is exclusive breastfeeding, but the supply isn’t there, we have agreed to structure each feeding time slot this way (don’t even get me started on scheduled feeding for a 4-day old… just remind me “new normal”):

The most irritating thing about this, besides scheduled versus on-demand (which they’re okay with us trying but we still have to insanely monitor everything), is that on a couple weigh-ins, Colten has weighed in LESS afterwards instead of more. I finally requested a new scale, which we got. The other irritating thing is how crazy little milk gets pumped out in these early days. Frustrating!

Alright, enough about me. Onto Colten’s update! Once again all the various departments did rounds – we saw plastic surgery, urology, neonatology and neurosurgery today. Urology expects to take the catheter out tomorrow, Monday, unless it is determined that some other surgery may take place sooner rather than later. Urology is also putting Colten on a small-dose daily antibiotic to prevent kidney infection while we wait to thoroughly check for bladder and bowel function. The neurosurgeons checked in on Colten for hydrocephalus and felt that his head size was growing a bit and we’ll continue to watch it very closely. The ultrasound will be tomorrow – Monday. The neurosurgeon said to us, “You’ll want to get yourselves comfortable with the idea of getting a shunt placed.” So we are. And I had a whole post about the shunt and it got deleted. But we’ll post more about that later…

That pretty much catches us up. The rest of today was just full of weighing, feeding, weighing, swearing, feeding, and then tons of snuggles and smiles as Colten spent the most time yet awake and alert! 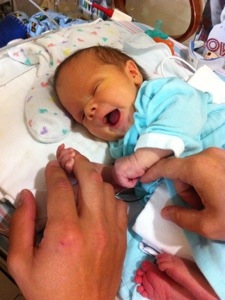 Richard and I even got to enjoy a quiet late dinner together thanks to various munchies brought to us by my Aunt MJ and Uncle Rick and my best friend, Kristen! Thanks for a delicious smorgasbord of food!