It was the weirdest thing last night… Colten was playing in his play yard then suddenly he rolled over, stuck his butt up, crawled over to the couch, pulled himself up and started RUNNING around the house! I was completely freaking out because of course he is only two months old and should not be doing, well, any of that stuff, even if he didn’t have spina bifida myelomeningocele! The U of M treadmill study staff happened to be here and as I quickly got my camera going on my phone to capture this, I asked them what in the world was happening. The lead professor said sometimes this happens in children with traumatic birth experience or birth defects. Something in the brain suddenly takes over the body and the child really isn’t him/herself. She said this ability would disappear as quickly as it had appeared. She also mentioned that the children learn quickly that it disappears so fast and tend to not take advantage of it when it happens again. I sat there, just staring at Colten as he ran up and down the hallway and around the living room. It was amazing. His feet moved under him perfectly and he was agile and fast. And he had a HUGE smile on his face!

Then we started to pick up the Legos strewn about the living room so he had more room to run. As I put them in the labeled bins I realized something was not right. How these bins were segregated made no sense for easy clean up. Just as I was about to get frustrated with the poor organizational method, I woke up.

Yes, it was all a dream. Oddly real. I even checked my camera to see if I had actually captured video. Very bizarre. It may have stemmed from my brain processing all the information we got yesterday at the Spina Bifida Association’s Education Day at Detroit Children’s Hospital. It was a long day but very interesting. We got to hear some of the great minds from Children’s Myelo Clinic speak, meet some Detroit area families, and after all that, took Colten to see his Great Grandma Judd (99 years of life!).

According to Dr. Ham, one of the neurosurgeons there, about 60% of Myelo children with a Chiari II malformation will need decompression surgery. We have not been told this by anyone else so we are still learning more about that. The procedure requires going through the back of the skull and the surgeons typically remove a small section of the skull bone and part of the top two cervical vertebrae. 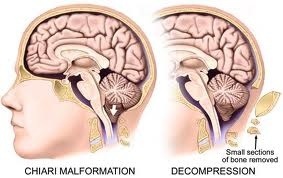 I’m not sure if I have ever explained the Chiari II malformation in detail before on this blog so here you go… The cerebellum, the back portion of the brain, grows a bit differently – it descends partly into the spinal canal and base of the skull. 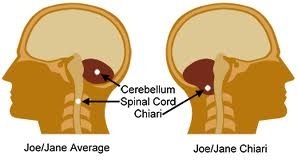 Most every child with Myelo has this malformation. Some are symptomatic and some are not (Colten is not at this point). Studies on the in-utero fetal surgery with these kids is finding that this malformation can be reduced with the fetal surgery. Fetal surgery can also reduce the need for a shunt in some cases. The doctors believe that the inability to process spinal fluid in these kids is due in part to the mixing of spinal fluid and amniotic fluid in the womb. The amniotic fluid kind of alters the brain’s capability in a way and it is then unable to properly work with the CSF.

Back to the decompression surgery. So whether or not a child is symptomatic Chiari or not, there is a 60% chance of needing this surgery at some point in his life. Or 40% that he won’t. I like 40%. I would prefer 60% on the positive side but 40% is better than 20, or 30!

There were also presentations on urological issues, orthopedic concerns, and executive function (thinking, processing, learning, etc…). I can’t say anything stuck out for me in any of those areas but an interaction with another mom at the end of the day revealed an interesting course of events. Based on some other information we’ve encountered, I had the idea that once Colten “put himself” in a wheelchair, he would be in a chair for good, or at least most of the time, if he needs a chair that is. And I’ve struggled with the idea of a toddler in a wheelchair, although that seems to be what families are choosing. There’s a part of me that thinks – “Avoid the chair. Use it as an absolute LAST resort. Push him to stand and walk. Do whatever it takes.” And I know that any amount of standing and/or walking will help build bone density. And as the U of M Kinesiology group presented at the conference, even just standing helps increase respiratory function, muscle function and a laundry list of other things. Walking increases these things even more of course. Then there is the other side of me that thinks – “Take the path of least resistance. Give him whatever device he needs to move as quickly as possible from point A to point B. Does it REALLY matter if he can walk? Stand? Just relax, enjoy what is, and however he grows naturally will be him.”

It’s simply not that black and white. The mother I spoke to said her daughter was in a chair by three – they had started the process to get her one when she was two. She is four now and is exploring forearm crutches. I did a double-take when I heard this. In my head there was a linear progression of mobility aids… leg bracing – walkers, arm crutches, wheelchairs. But as she explained, when her daughter was younger, she wasn’t strong enough to move very well with arm crutches and the wheelchair provided her all the mobility and speed she needed. One of her friends uses arm crutches though and she thinks they’re pretty cool so she asked to try them out at PT and is doing a great job with them. She still opts for her chair most of the time, but she has options. It’s not finite. It’s not absolute. It’s not black and white.

Just like Spina Bifida – not a black and white birth defect. It’s a scattered diagnosis, and even when identical in level/defect, no two children have the same exact innervation. It’s a wait and see kind of thing. That whole thing is aggravating and annoying to me. I don’t have patience for this type of thing and I get that the “wait and see” concept is suppose to be my “lesson” in all of this. I just am having a difficult time accepting and embracing that lesson. In the end, Colten won’t know much of a difference. He’s going to go through life learning how to do things just like all other kids have to learn how to do things. Bit by bit. Some kids learn things easily – some need more assistance. There are things a child never achieves and other things s/he excels at. When you break it down like that, not knowing his future is no different than not knowing my other sons’ futures. So why I have this overwhelming desire to know more about his mobility is sometimes beyond me.

The other new thought that came to me yesterday was – and I wish there would have been an opportunity to ask this question to the group… and I think I will next time I am with an adult with Spina Bifida Myelomeningocele – As an adult, if you could go back and CHANGE something from how your spina bifida was managed as a child, what would you change and why? Would you have wanted more therapy to help you possibly walk or walk better or walk farther? Would you have wanted less therapy because all that work didn’t do as much as you hoped? Was there something your parents/caregivers did that you wish they would not have done? Or what do you appreciate the most about what they did for you? In other words, as a person with spina bifida, what advice can you give to us parents of children with spina bifida?

A lot of these areas go back to just wanting to do the right thing for Colten. It’s not about what we want as parents (well, kind of it is, right?!), it is about what is best for him and his future. We want to give him the best, but it’s hard when you don’t know where to focus your energies. Right now, we’re trying to just enjoy the baby in him. He’s two months and starting to really show off that beautiful smile! 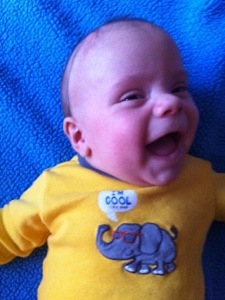 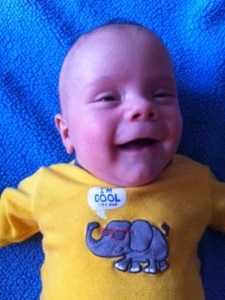 3 thoughts on “Colten RAN Around The House”