There will be a more thorough update about physical therapy and EarlyOn in a few weeks, after the official 6-month review. Today’s appointment though was a good one and I got some pictures to share. Colten has not been super cooperative in past appointments and really, how much are you going to do with a child under six months?! But now we’re seeing some action, work and progress!

Colten is working on getting a few things down that most six month olds can do on their own:

He has a hard time sitting up on his own due to the weakened glute (butt) and hamstring muscles. When you sit, lean forward – your back engages. Colten can do this movement and has a very strong back. Now lean backwards. Your butt, hips, hamstrings and abs engage. He has to count mostly on his abs during this movement and they just aren’t strong enough to support him fully.

As for rolling, we’re slowly getting there. He will rock side to back to side to back, and when given assistance, can certainly get his body over onto his stomach. He just enjoys being on his back far more and tries to roll himself right back over!

So the PT, April, worked him out today and he was very cooperative, happy and engaged.

Holding the right super-flexible leg back to encourage him to reach more for the left foot.

Assisting him rolling back to belly.

While activating his abs, April had Colten reach for a toy on each side of him and in front. 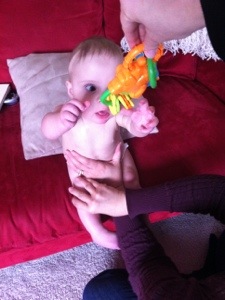 Working on reaching forward, while stretching the hip flexors out