When the parking lot shuttle (also paid for by Jay’s Juniors sponsors) dropped us at the airport December 5th, I was a bit worried how we would manage getting everything into the airport (6 suitcases, multiple carry-on bags, stroller, wheelchair, and 4 young children). I should’ve realized by this point that EVERYTHING was taken care of. EVERYTHING. We were met at the shuttle drop off by a swarm of radio station staffers that quickly helped us grab bags, push the stroller, push Colten, and guide us to where we needed to be to get our bags checked. We were welcomed at the escalator with a Jay’s Juniors sign (and my parents!) and proceeded on to check our luggage. 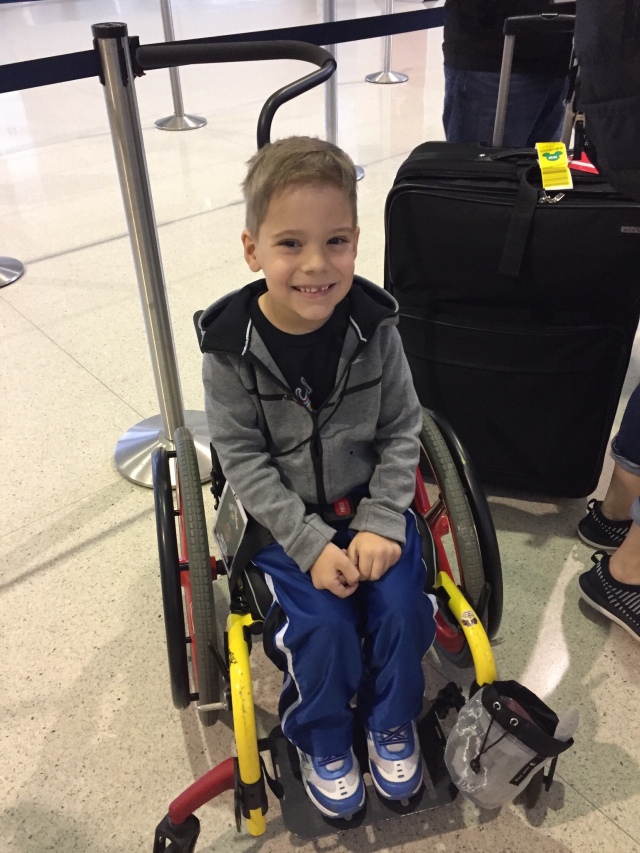 Once that was done, we moved through TSA as quickly as we could expect to. By the way, a lot of medical supplies (especially things like lubricant and sodium chloride solution), get read by the scanners as potential explosives. This made for some interesting searches through our bags because we had backup medical supplies in some of our other carryons in addition to our carryon suitcase. When we got to the gate, an entire group of superheros and disney characters were waiting for us – including Paws! Tons of hugs, stickers, and cuddles followed… 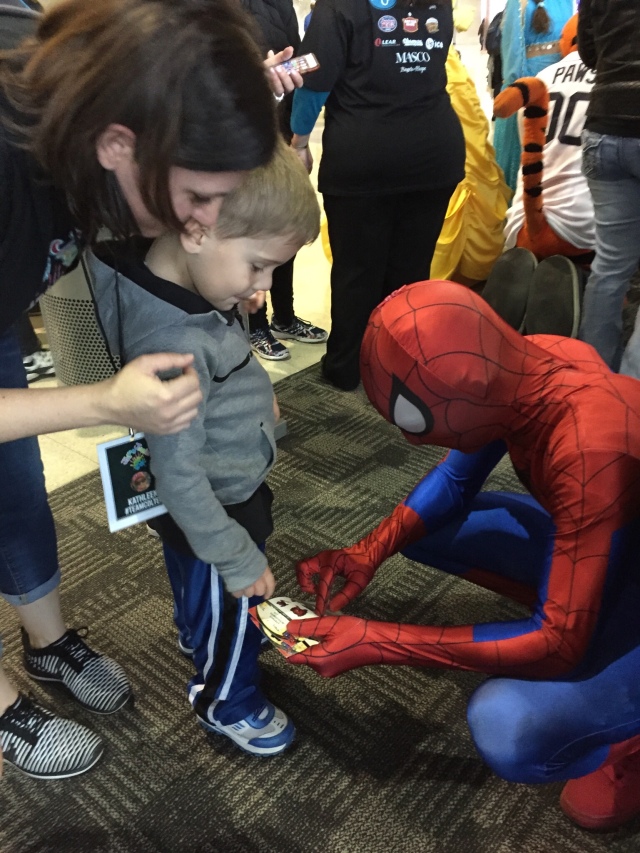 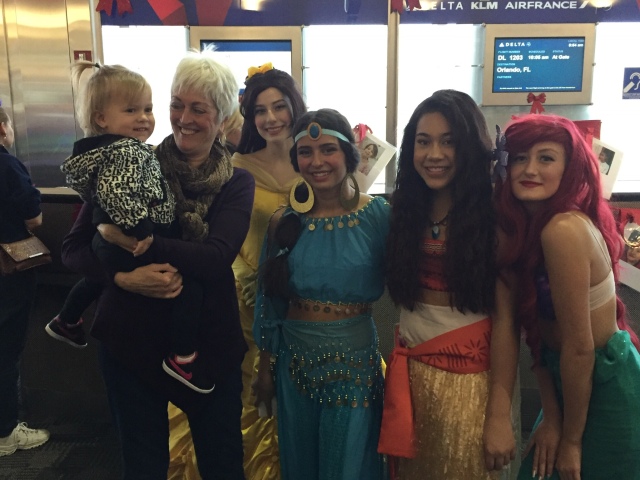 Each of Jay’s Juniors were given a goody bag of treats, then each family was given ANOTHER bag of stuff from Delta – eye masks, ear plugs, more snacks, waters. I keep going back to tears and overwhelming. All I could do was hope that I didn’t cry throughout our whole trip, because it felt like I had been crying happy tears since October 31!

On the plane ride out, we had three seats in one row and three right behind. Richard was with Sophia and Parker; I was with Colten and Max. This was Colten and Sophia’s first plane ride – and likely the first plane ride Parker and Max would remember. Colten did NOT like take off. All other children were not phased by flying. Once we were up, they brought all of the Jay’s Juniors cupcakes (let’s go back to our magic word – overwhelming!). 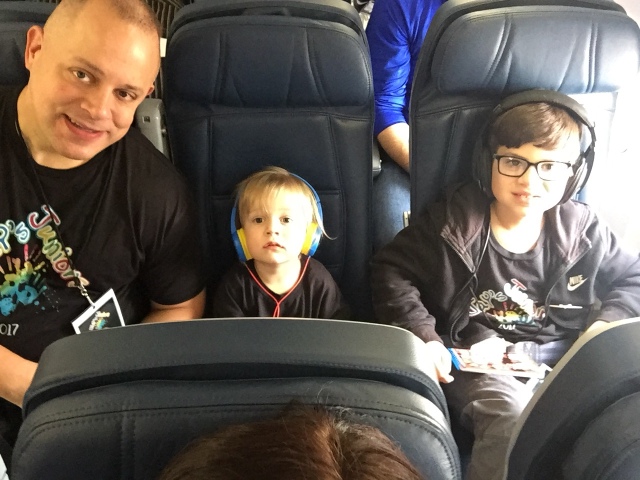 We were very glad that we had a plane with screens at each seat – some of the kids watched movies, one little one slept. Overall it was an easy flight. I can say that now after downing quite a few Xanax for my flight anxiety!

Once we arrived into Orlando, we were moved onto one of the Disney’s Magical Express busses along with luggage and taken to our hotel. Breathtaking!

Everything at Disney was decorated for Christmas and we had the pleasure of getting to see some massive Christmas trees at each park and our hotel. We were given two rooms, connected, for the size of our family – one had two queen beds and the other had a queen bed and a bunk bed. Don’t judge but Richard and I each enjoyed a spacious queen bed to ourselves throughout the trip!! The boys rotated a bit between the queen bed and the bunks, and Sophia actually had a pack and play / crib that she slept in. Plenty of space, and glad we had two rooms because due to Colten’s bathroom needs, having a second bathroom was so helpful. And yes, we saw animals right outside our balcony! 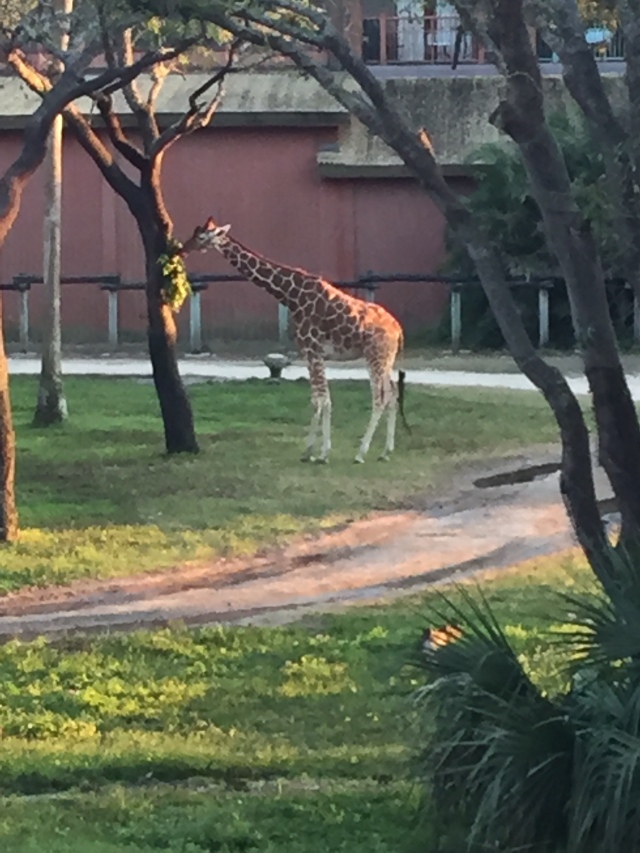 Since we were in Disney five days and had a four day park hopper, we had carefully plotted out what parks we would get to on certain days. If you haven’t been to Disney in a very long time or ever, reservations for meal times, shows, and rides are almost critical to getting everything in that you want to do. Only having a couple weeks to plan after getting our ticket information, we got some great advice from our friends (thanks J&J!) and were able to secure some highly recommended shows and meal options. Our pre-planning (ok, MY pre-planning) was a huge help to laying out our trip but I was surprised at some of the last minute changes we made that worked out way better than anticipated. So five days, four days in the parks – this meant one day with no parks and we figured that would be day 1. We would be tired from the travel and just spend time exploring our hotel grounds. So we arrived, walked around looking for animals, grabbed lunch and played on the playground for a bit, then back to our room for our luggage, handled the medical/bathroom stuff that needed to be done, and figured out our timing for the rest of the day. Disney is so massive they suggest you give yourself 90 minutes when traveling around. We had found a great website that helped us plot a little better in terms of timing, but there doesn’t seem to be a way to know when a bus will actually arrive at a station (except “20 minute intervals” or something like that – no actual TIMES), so we had to buffer everything anyhow.

We had reservations for dinner at Fort Wilderness Lodge, for the Hoop-Dee-Doo Revue, the longest running dinner show at Disney World! This show came HIGHLY recommended (and contested by me because it would take up TWO of our sit-down meals and I was already nervous we wouldn’t have enough meals to feed everyone all five days!) and did not disappoint! I think a lot of the humor went way over our kids’ heads, but it was very entertaining, lots of music, tons to look at, and family style eating. And drinks were included so that was a nice end to our evening! Eat, drink, and bus back to the hotel!