Due to long opening hours at Magic Kingdom this day, we packed in a LOT! 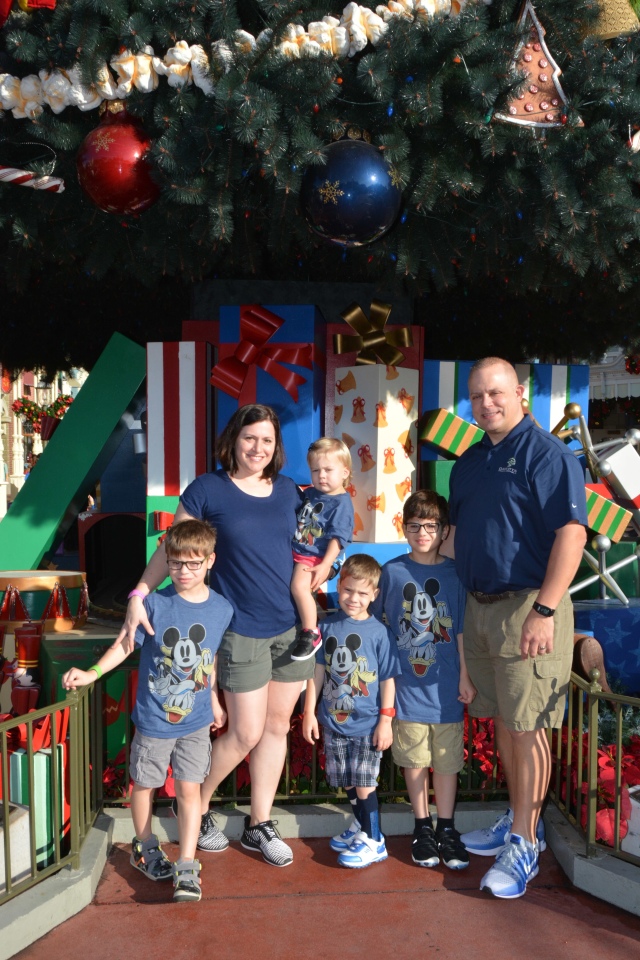 It was beautiful weather and we got there early so we were able to jump in a few ride lines without a FastPass. Very first ride? Astro Orbiter. We could all go on – and Max even got a pretend “birthday” so he could be 7 and ride with Parker or alone instead of a parent. Thank you to the very nice ride staffer that permitted this. 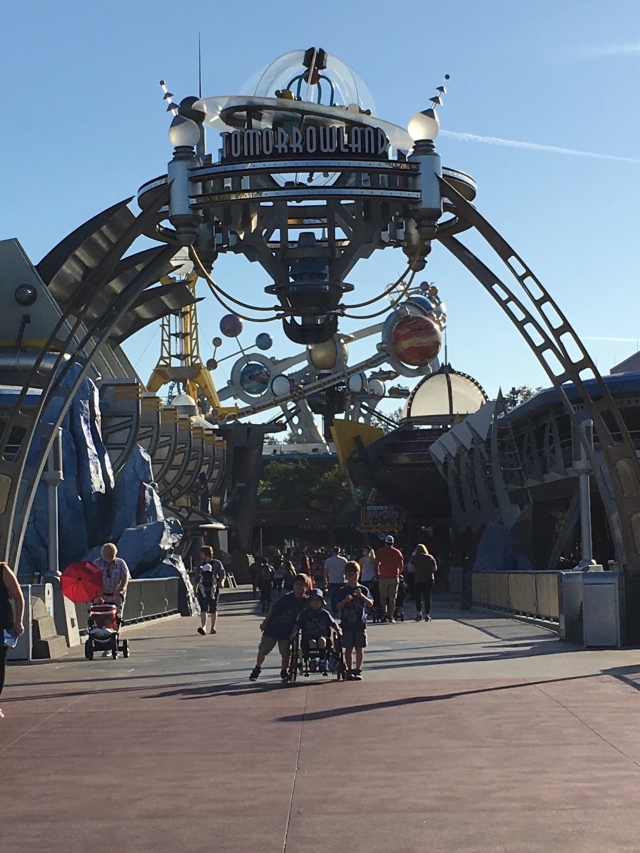 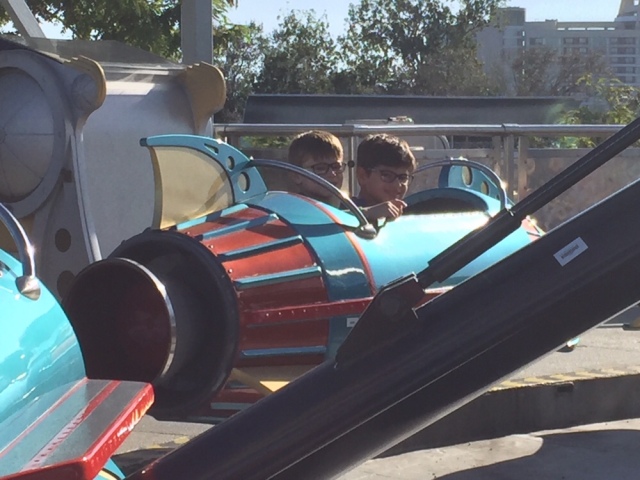 Max somehow remembered this grand lie every time someone asked him. His mother on the other hand, was so honest that she almost spoiled it a couple times. Thank you Disney, for teaching my child to be a good liar finally…. The kids enjoyed driving cars after that, then flying high with Dumbo. 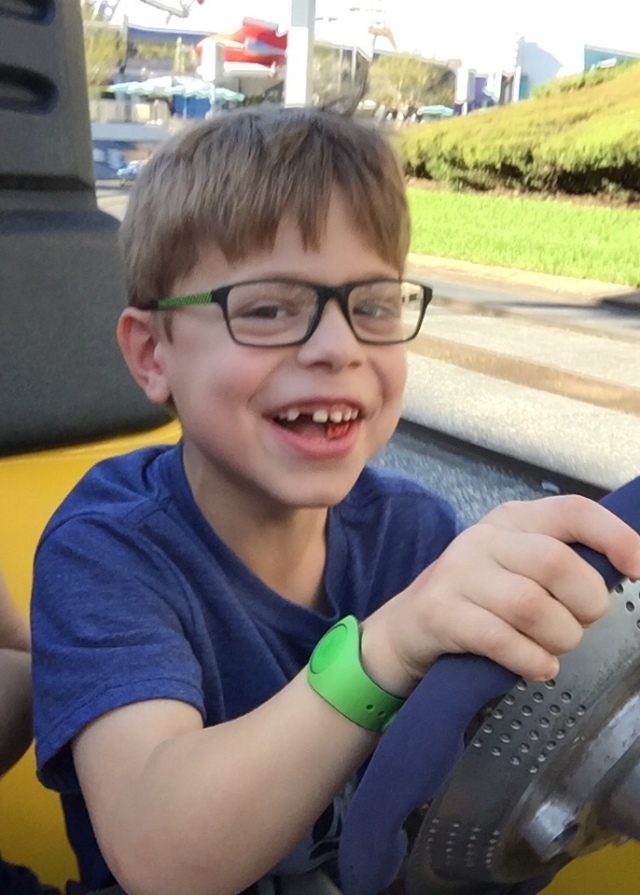 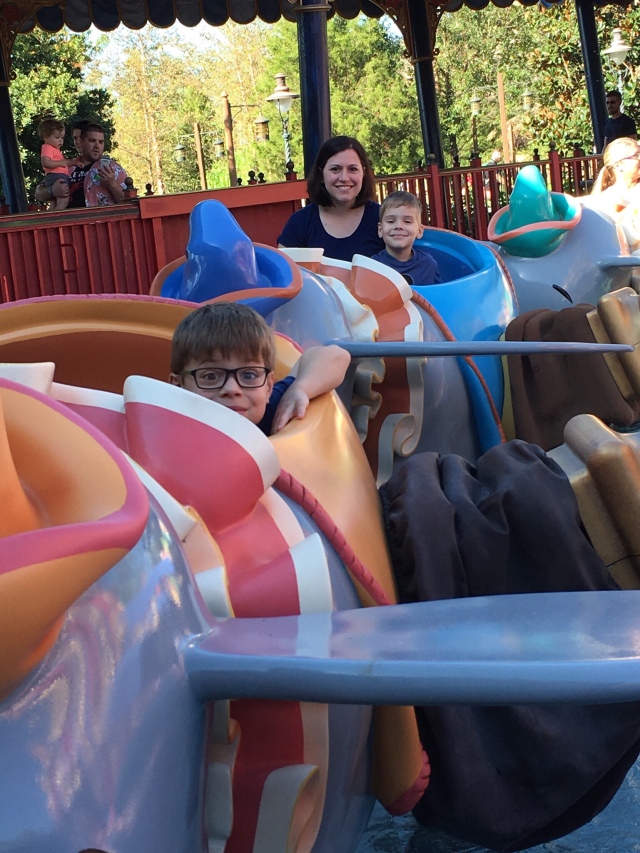 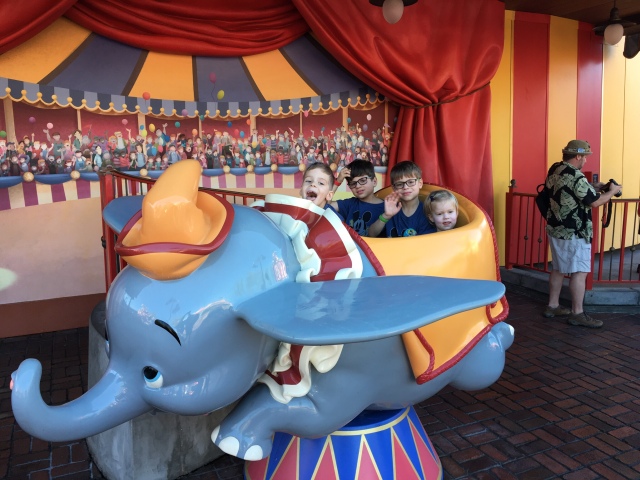 We stopped for a snack and still don’t know why/how this happened but the cart worker gave Richard two free hot pretzels that morning! Score!

We followed that up with the Buzz Lightyear ride AND getting to meet the big man himself – our first character!!! 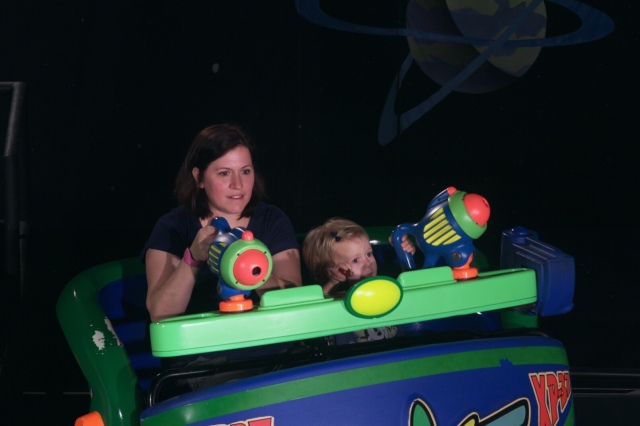 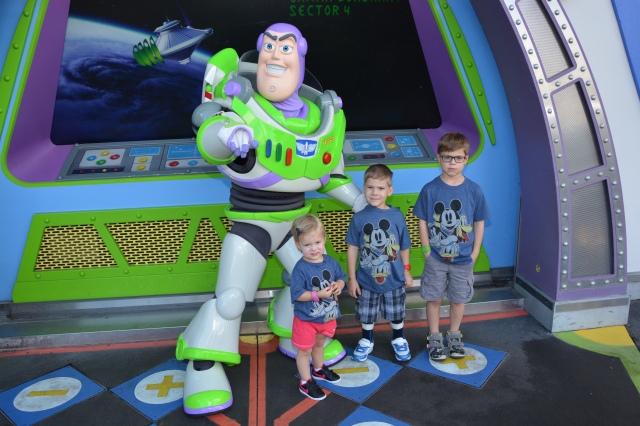 Then onto the teacups – we had a #teamspinfast (Colten, Parker, and me) and a #teamspinslow (Sophia, Max, and Richard). Everyone enjoyed this one! (As evidenced by the short video of #teamspinfast) 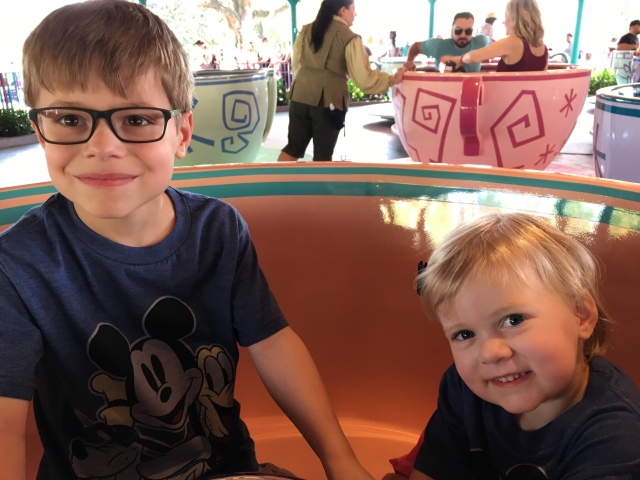 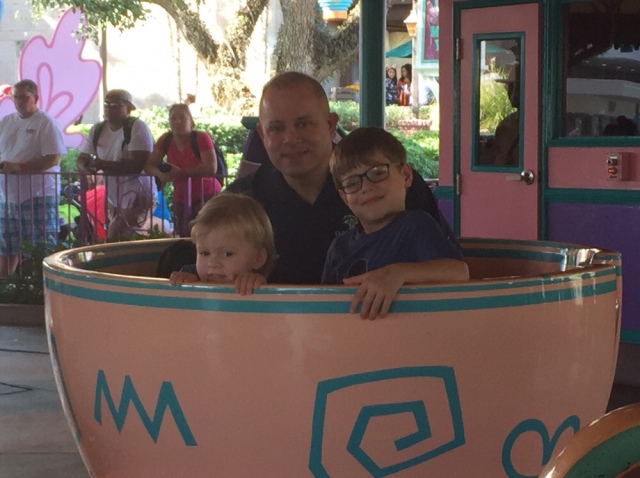 Then we hit the Little Mermaid ride (Sophia reached out and waved at every Ariel and said, “Hi Ariel!” repeatedly to each one. Also, Richard looks overly excited in this picture….). That was all before lunch!!

Our initial plan for each day was to stay at the park until about 1pm. We would eat lunch right before that and then head to the bus stop. This would allow us to hopefully get back to the hotel about 2pm, handle Colten’s needs and let Sophia nap. Then we would return to the parks around 5pm, do a few more things, then eat dinner late. That was our plan. In reality, I’m sure we never left a park before 2pm, Sophia napped on the bus every day, and we were able to get back to the parks sooner than anticipated.

As we pushed to leave Magic Kingdom for our “midday” break (it was 2:30pm), we came upon the parade and of course, had to stay and watch. Sophia had fallen asleep in the stroller but we woke her up for Mickey and Minnie at the end as all she talked about leading up to the trip was meeting Minnie and we hadn’t seen either of them yet. 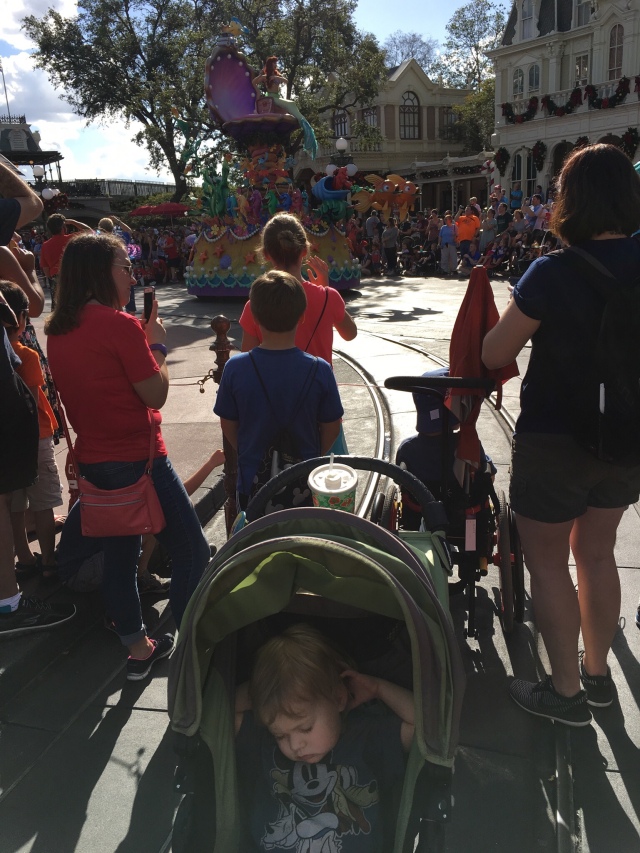 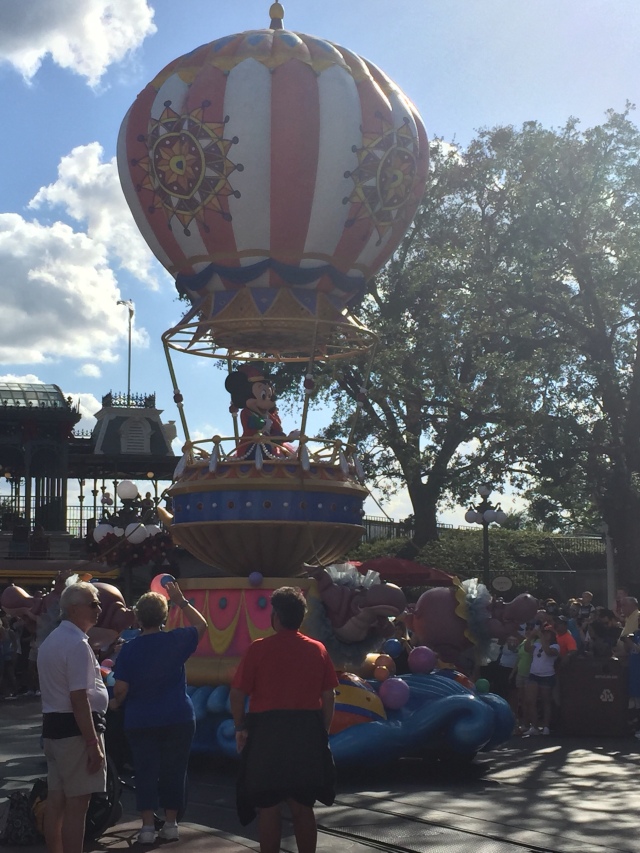 I’m so glad we stayed and just enjoyed it instead of rushing back. Thankfully Colten’s not on a strict timing with his needs so we can flex sometimes. While I handled Colten’s stuff, Richard took the other kids down to the pool for a bit to swim and play with the activities nearby, such as a giant Connect 4 game. 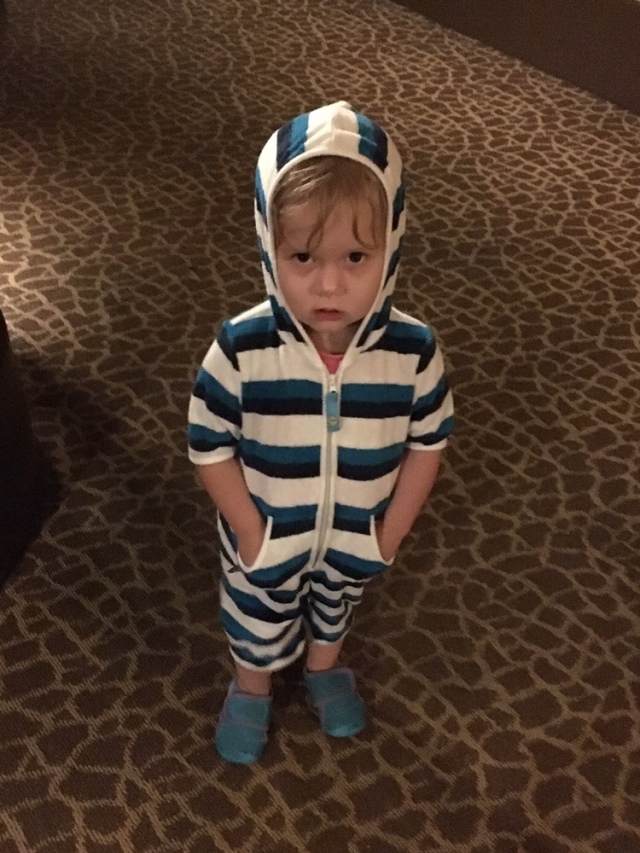 Because Sophia slept in her stroller and on busses, we only attempted napping her once at the hotel – and this meant we weren’t at the hotel as long and could get back to the parks – it worked out way better than I anticipated. As I mentioned, Magic Kingdom was open late that day and we for sure wanted to see the fireworks and lights shows. Arriving back at Magic Kingdom at night was simply beautiful – the castle lights were mesmerizing! 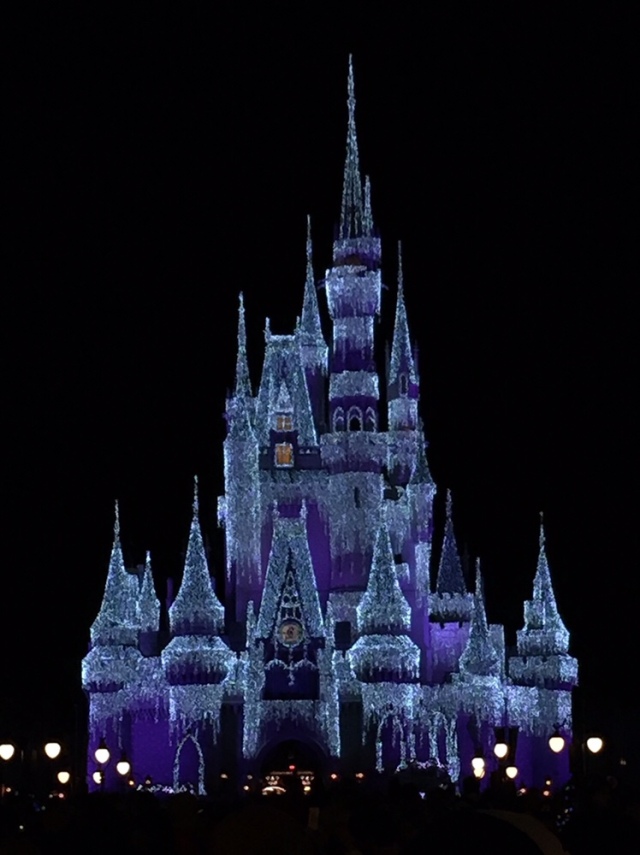 Earlier in the day, Max had asked about doing the Seven Dwarfs Mine Train ride and the wait time was horrible and we couldn’t get a FastPass either. I promised him we would stand in line later that evening if he still wanted to ride, but I didn’t want to waste daylight standing in line! So, Max, Parker, Colten and I all went to the Mine Train ride and stood in line for maybe about an hour and a half or two. The boys were incredibly well behaved – we played some trivia and “would you rather” games, and they played the games that are along the queue, and we snacked on candy. Richard and Sophia fit in about three other rides while we stood in line! It was totally worth it – although after seeing their faces, I was sure I had lost any future roller coaster buddies for the week!!! The Mine Train was so shaky, there were parts of the ride where I reached forward and held Colten’s head – I was sure he was going to either hit his head on the side or conk heads with Max! There were some tears when we got off the ride, but if you ask them now, they say they liked it – EVEN COLTEN!